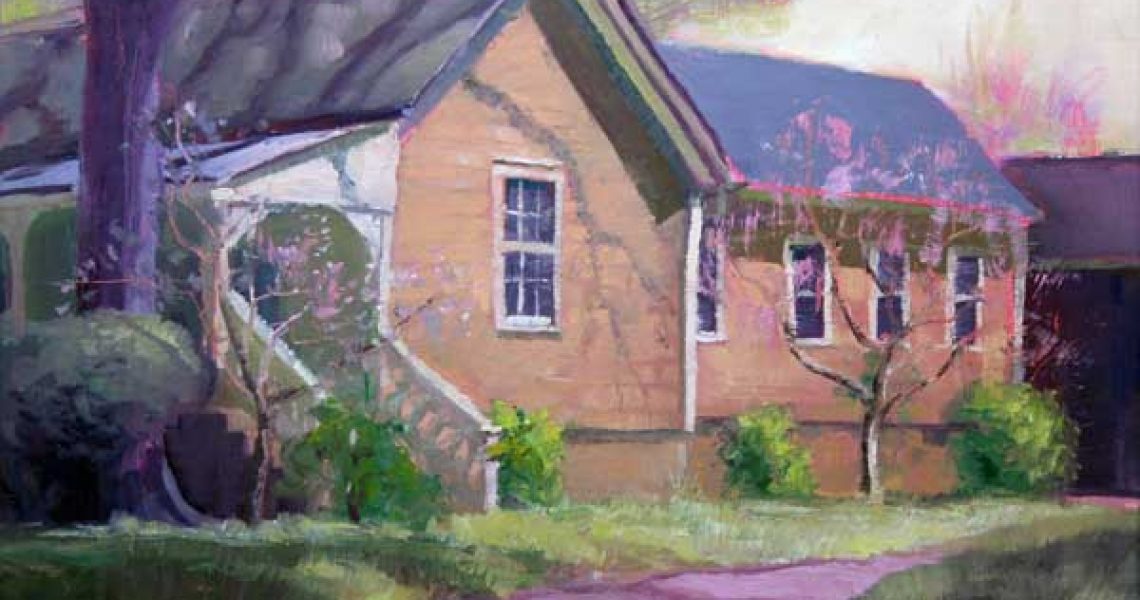 I’ve been doing Plein air for about three years now, maybe just a bit longer. The third Marietta/Cobb Museum Paint Out was held this weekend. The museum is small but has a great staff and utilizes many volunteers. They have quite a few exhibitions every year along with organized competitive shows one for all art including sculpture and photography called Metro Montage. The other is their Plein air competition. This is the third time I’ve participated and I’ve finished third two years in a row.

If you’ve been following the blog you know I’ve been painting Marietta for the last few weeks in anticipation. I like these competitions, they bring out the best in me which is strange because I’m not an overly competitive person—as a rule. The night before I was on Google driving around the square and some of the neighborhoods finding possible spots to paint. I even did a few small drawings to work out some compositions. The first prize was $150 —so not a lot + museum membership for a year. Well, I’m already a member. None-the-less I was very nervous the night before and hardly slept at all. Up at 6:15, I was at the museum by 7:15 to get my substrates stamped. As I walked in I ran into John Gurnsey. I took a plain air class three years ago from John and he’s a full-time professional, teaching painting all around town. At that point, I summed up my chances as slim for the top prize. John was just on his way out with his boards and we just chatted about a few possible painting spots and then he left. Inside I ran into Charles Scoggins, another accomplished painter—two strikes! I decided to paint a view of a row of the stores around the square. I used one of the drawings as a start for the painting that I planned on a 12 x24 inch board. This is a unique size and always impressive —if executed properly. The weather was poor, it rained the night before and it was overcast almost the entire day. My plan was to paint the far southeastern corner with the Antique Store at the far end and a few small shops to the west. I set up right on the square and with my drawing in mind, I straightened the stores to a face-on view bleeding the tops off the board. This allowed me to do an almost plan on view and made the drawing much easier. I planed some light and shadow to emphasize a few areas, I also intended to put in two vehicles, two of the large trees, and few walking figures. Very ambitious but with all the planning I was well prepared. I usually use vine charcoal to do a preliminary drawing. It’s soft and easy to just wipe off if you need to adjust it’s also more tonal and quick to use than a pencil. After my charcoal, I roughed in with a light-dark wash of oil. At this point who should show up but Shane McDonald. Shane is one of the best painters I know and he actually won the first Cobb plain air. Strike three!

Pressing on now with just a bit less confidence I stuck to my game plan. Instead of playing with the tree shadows and the light off the cars, I concentrated on the wet street reflections and the warm interior lights of the stores. As I said, I usually start with a shadow color of every object I paint as a rough-in. I use a lot of alizarin crimson and ultramarine blue at this point mixing in just a touch of yellow or ocher to get a black. With a few variations, I use this for the darks and varying greyed values either warm or cool—red, blue, or green for the rest of the objects. Sometimes I’ll change key with lighter tones in the background to get some atmospheric effects working. This is not intuitive and it’s hard to work out sometimes. Obviously blue recedes —but some times I go with alizarin (Gurnsey influence)  As with a lot of things this is not written in stone. So…back to the painting, I mixed up the lighter versions of the colors to put in on top of those nice darks. I brushed them in using the base for shadows here and there. All of a sudden I lost that nice dark rainy look! Dang! The only option I had was to really lighten the one patch of sky I had to make everything appear darker. Short of repainting the entire panel I  had no choice. Almost a straight white—ooph!

I also did a few sketches the previous night of the famous fountain on the square. Google images are a great tool and I noticed that the ones I liked were all very close shots so I set up for number two right in front of the fountain. I moved it over to left a bit and made it the largest object in the painting. To the right was a smaller statue that I was intending to leave in silhouette and a crepe myrtle—not yet left out. Busy fountain, the busy tree behind…I realized that this was not going to be one of the two that I was allowed to put in the show. Still, I enjoyed working on it as the afternoon wore on and the weather tried to improve. A young guy named Peter talked to me for almost an hour as I worked this one out. I actually don’t usually mind that just so long they just talk and I don’t have to listen to carefully. So I finished up this 9 x 12 and went to lunch at one of the restaurants right on the square. My next idea was to do a view from the railroad crossing up to the square. This was another idea I worked out the previous night. I planned to do an 18 x24 this time so I was pushing it with a start time around 2 and a 6 PM deadline. The weather was getting worse instead of better and I was having trouble getting this view to work with the charcoal. I  switched to a 12 x 15′ board and hung in there until the skies opened up and washed my charcoal off—even then trying with just paint, but it was too much so I threw in the towel.

The first day ended with getting back to the museum and turning in my days work along with checking out the other paintings. Lots more than I thought, some very good but I was confident I was in there with my 12 x24. I got home before five and had a glass of wine and some dinner. Lather that evening I got my frames and tools together so I could take care of that after painting Sunday. I decide to borrow my wife’s nice new wagon to transport it all and then I hit the sack early.

Sunday I was up a 5 unable to sleep any longer. if possible the weather was worse! At least it wasn’t raining but the wind was wicked and cold. I drove to the museum checked in my boards and then got in the wagon on a search for some spring color. On the home the previous afternoon I saw some nice blooming trees along Cherokee Street northwest of town. After about an hour of driving around looking for alternatives, I ended up there. With no preliminary drawing, I was a bit lost and I finally parked myself in front of a small cottage with a few early blooming dogwoods. I really wanted to do a backlit subject but the arching shadows of elaborately designed Victorian gingerbread took control of my brain! I’m queer for that stuff. Amidst a 40 mph wind and about 30 degrees, I worked on my best linen board. With a super dark rough in underneath my lights were garish when I put them in plus all that gingerbread —what a mess. But I came to my senses around noon. I actually got out my Gamsol and poured it on the board and wiped it clean. Three hours wasted and only three hours to go!

Turning around I noticed the house behind me was lit up like a Christmas tree. The right side all light, with a dark garage in the back that made it even brighter. The color was arresting too, a dark straw orange against the bright green of the newly leaved bushes and fresh grass, plus a few just blooming dogwoods and stairs that came down from the porch to act as a center of attention…perfect! It was very similar to the Magnolia House painting I did two weeks previous only a bock from this location.  I painted with a purpose and delighted in the colors and structure. I had some issues with the stairs but in the end, covered them with a bush. I spent the last hour putting in some shadows and highlights on the grass and branches of the dogwoods and laying a pink haze above them —not actually there but it really worked. The linen surface is so smooth and it takes some getting used to but you can really do some wonderful effects with the side of your brush.  Scraffitio works the best on this surface too and I finished up with a bit here and there along with my name scratched into the corner.

Back to the museum I got the two good ones framed up, came up with a few titles, and drove home. 6:30 was the reception and I arrived fashionably late. As I walked into the gallery was packed and I bought a glass of wine and made my way around the first room. The second painting was the second award winner. A nice bright painting of one of the street corners—I was a bit confused. Certainly not a bad painting but not the quality I was expecting of a winner with this many good painters. You can never tell—every judge is different. I moved on, just then Jane Springfield, a friend, and fellow painter came up and said—”Congratulations Ed!” Well, I knew I didn’t win second place. She tugged me into the back gallery, there was my second painting with a blue ribbon next to it.

I knew it was good but as I said you never know what the judge thinks. I was happy—still am. Later that evening my daughter showed up with my grandson Cole, whom I adore. We went for ice cream after to celebrate.  A very busy but wonderful weekend.