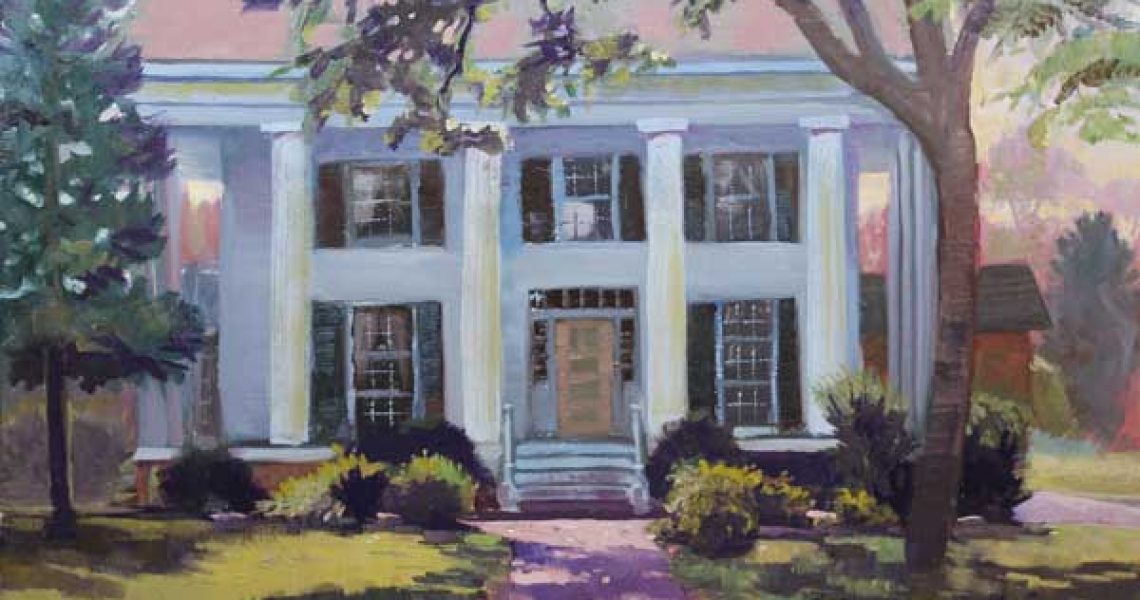 I’m a bit of a fanatic and tend to do things to the extreme, good or bad. Of course, painting is one of those things. My subject matter is not all that radical though—I like architecture. My first plein air classes were with John Guernsey, who lives here in Marietta and I consider him very skilled and I learned a lot from the sessions I had with him. One of his classes met at a park in Marietta and he had us paint views of the older southern houses on the road directly across the street. I have always been a big fan of Southern domestic architecture—classic proportions, simplified ornament. You might call this style Classical Revival and I’m drawn to them like a bee to honey and in this section of Atlanta, they are plentiful.

Again, I tend to the extreme side of the board when it comes to subjects —I like the grand plantation homes! Here in Roswell, there is an entire group of homes built by the founders and early farmers that settled this area. The old section of Roswell from the square down to Canton street is covered with fantastic examples. There are three large plantation homes, Bulloch Hall, Barrington Hall, and the Smith Plantation.

I’ve painted Barrington Hall several times. It’s your classic Greek Revival plantation mansion designed by Willis Ball in 1839 with huge two-story fluted columns on three sides—magnificent! And the grounds are nice too with a long and wide view of the front. Last year I did a view straight on 18 x24″. I’ve also done several vignettes. Of all the areas grand homes I like this the best. It’s right south of the square at the end of Mimosa Street in Roswell, you can park there and walk up the stairs to see it.

Bulloch Hall is about a block west and is famous for being the home of Theodore Roosevelt’s mother, Mittie Bulloch. Its on a wonderful property with outlying buildings and ample parking. You can tour all of these fine homes, honestly, I have not—Too busy painting pictures of them. I’ve also painted Naylor Hall on Canton Street, a smaller but equally attractive home that has gone thru some changes from its original look and now is used as a banquet facility.

Last Spring I spent the day on Bulloch Avenue and painted and a view of the Hall with blooming dogwood plus a smaller view of the lovely Mimosa Hall. This home is hard to see and is a private residence with a long stone drive that leads down to the home. It’s unique in having a sandstone veneer front, with the white trim and square columns. I did this early in the day and it’s 10 x11″, so small. It was cloudy so I forced the light a bit but I enjoyed working with the foliage on either side of the drive and the subtle shadows. The view of Bulloch is much grander and rendering this house was a challenge. It has two sets of columns, one inset into the front of the facade —interesting and unique. The huge fluted outside columns tower above and reflect the light and green grass of the large expansive lawn out front. I’ve painted here before but my skills were not enough that first time around, I hope I did a better job this time.

Just recently I spent a few days over at the Smith Plantation—it’s right next to the city hall. Of the three it’s the most confined and is more like a farmhouse. I believe several of the outlying buildings, some of which are very interesting were moved nearer the main house at one point—I would guess to reduce the acreage, which is on prime property. I have just finished three views, one of the back of the main house, a smaller 9 x12 of the cookhouse, and a 12 x12″ of the charming caretaker’s cottage.

All in all, there is not a lot of room to get a good painter’s view of the front of the house—I’m still working out some ideas. As an update, I’ve done the painting of the main house from the front just recently. It took two days and several hours in the studio to get it done and it benefited from the lack of foliage this time of the year.

The grounds are open and available to anyone who would like to visit these historic homes. I appreciate the dedication of the staff and the community that supports them to keep these structures alive and healthy.