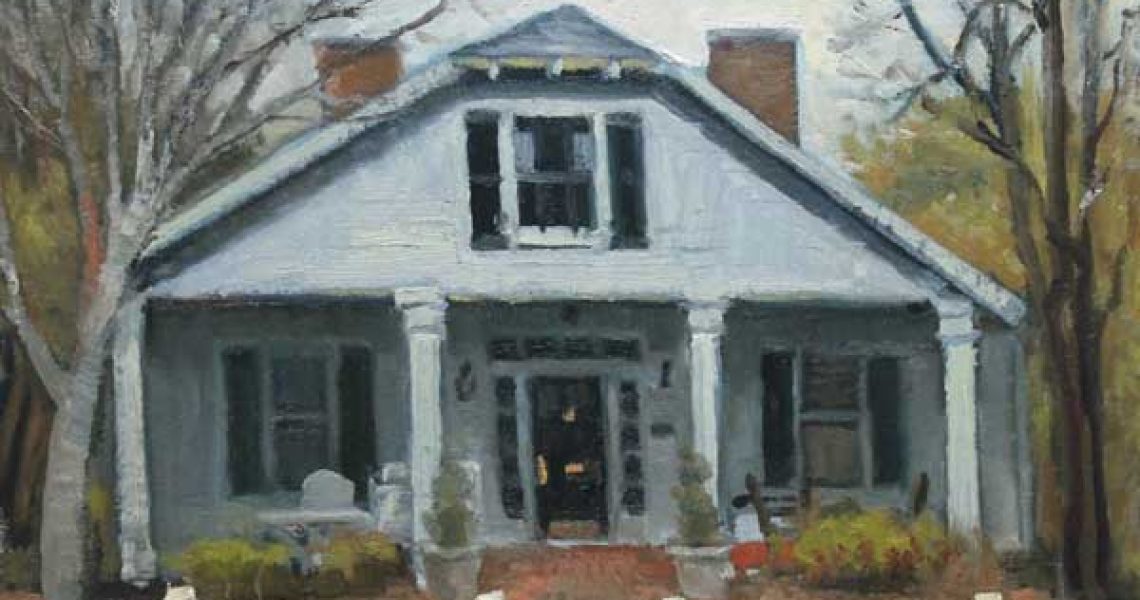 Over the last several years I have spent quite a bit of time on Sloan Street in Roswell. The road reaches back east towards Big Creek ( or Vickery Creek, as some call it) from Atlanta Rd. and is about a mile long. Many of the houses are original and date back to the 1850s —before the Civil war. I usually park at the mill and hike up the street looking for targets of opportunity.

On Valentines Day and I was up early and over to Roswell where I found myself in front of this older yellow home with this slouching metal roof. I’ve scouted this spot before so I wasted no time setting up. It backs up to the creek with the ridge behind it about a mile away. The slight backlight gave it a greenish tint against the blue behind. The dog in the painting started barking about 10 minutes in and kept it up for hours. I felt bad about the neighbors on a Sunday morning trying to relax but, I was as stubborn as the dog put it out my mind. Finally, a guy came out, he said to me “just let him sniff you and he’ll settle down” So I went up to the mixed beagle and reached down reluctantly—he gave me a sniff and scampered over to a tennis ball then came back and pushed it through an opening in the fence. I threw it a few times for him until he appeared to have enough. He sat by the fence for the next hour as I finished up but never barked again.

This last Sunday was cloudy and I found myself back over and in front of this classic bungalow. I had to watch that I kept the tone a shade or two under the brightness of the sky or it just would have no weight to it at all. This house features a curious post and beam fence only about a foot off the ground. I guess it’s all for show, because it’s not stopping anyone or anything. I stuck with the straight-on view to play up that symmetry, many times a rendering at three quarters is just too much like a real estate sales photo. I tried to find some information about this house online but found nothing. The two chimneys certainly date it to the last part or mid 19th century.

On the Mill side of the street near the corner with Atlanta Street are two rows of apartment-style housing called the Bricks.  They were built by Roswell King, the founder of the town in 1840 to house his textile mill workers. Supposedly these are the oldest style apartment homes in the South. They remind me of row hoses you might see in Philadelphia or Boston. Many have now been rebuilt into upscale expensive townhomes. The two paintings here show the attractive warm white they have been painted—but I’m sure they were brick red at one time.
The mill, which is a block south of Sloan was burnt to the ground by Sherman. The Bricks and the houses on Sloan St. were spared and although most of them appear to be built a bit later they are none the less the oldest domestic homes in the area. Most are one-story bungalow style, some still with metal roofs. The side streets too are populated with these hardy little homes that have seen generations grow up and grow old.

The paintings below were painted in 2013 and all are 9×12″, a size that for several years I painted almost exclusively. Since I’ve found that it takes me no longer to do a 12 x16 so I do less this small size. I’ve been accused of “Fence Porn” and I admit I do love a good fence. The trick I have learned recently is to paint them a little more suggestively now. You don’t have to get every picket there. Best to leave them a little out of focus too. Working on the shaded house porches is my favorite part—when you can get that sun off the roof working with the shade you really get a nice feeling of light. In Plein air painting it’s about the most important element.

If you’d like to try your hand at a few houses I’ll give you a couple of more tips. Use a very large flat to start —heck use it for a good long time. It’s much easier to do straight box shapes like walls, windows, and doors. The sharp edge of the brush is like a ruler. Colley Whisson taught me to cut a 2″ flat down from the ferrule with a single edge razor blade —just a bit on both sides. This gives you a razor edge. He says it’s like customizing your brush for the work you do. Give it a try with an old brush first —be careful not to cut yourself. Also, I spend a lot of time on the darks, basically, the whole painting, other than the sky is dark. All the shadows, all the upright surfaces. I use a fast-drying medium that sets up pretty quick with thin paint so when I go at it with my lights I can go right over them – no problem. Use some nice thick paint for the lights. The sun lighted sides of the houses, foliage and grass—mix a bunch up and break up the colors with several close shades, cool and warm. Finally, just about every house reflects tremendous light, white ones especially. Get those greens shinning under the eves and you’re on your way to a nice painting!

Some times in the heat of the summer I just use mineral spirits instead of a medium because your brushes can get stiff but other that Archival Oils Odorless Lean is all I use. A caveat would be that you must clean your brushes promptly. Go home at the end of the day, use a brush washer and mineral spirits, then I soap out and oil every bush that you use—you don’t want this medium drying in a good brush.

Other than the classic southern shotguns and dogtrots there are a few attractive colonial two-story homes tucked in between like the two above. They too look mid 19th century but I have no information on them. As I mentioned, this area is very trendy now and unfortunately has, like the one in “Blue Backyard” below been completely updated and is unrecognizable from when I painted them just a short time ago. The house in the painting at the bottom with the dog on the porch burnt to the ground last year and has yet to be replaced. 19th-century architecture, in general, is vanishing fast, so get out there and do your best to preserve some history!

House portraits can get you some work too, I’ve picked up several commissions from folks walking their dog or strolling by and noticing me. It’s a way to pick up a little cash and get better at what you do. I’ve managed to get quite a portfolio of work that has some beauty and also some historical value. I suppose it’s not everyone’s cup of tea— but that’s what makes art and Plein air painting so neat. Every painter has his own likes and interests.