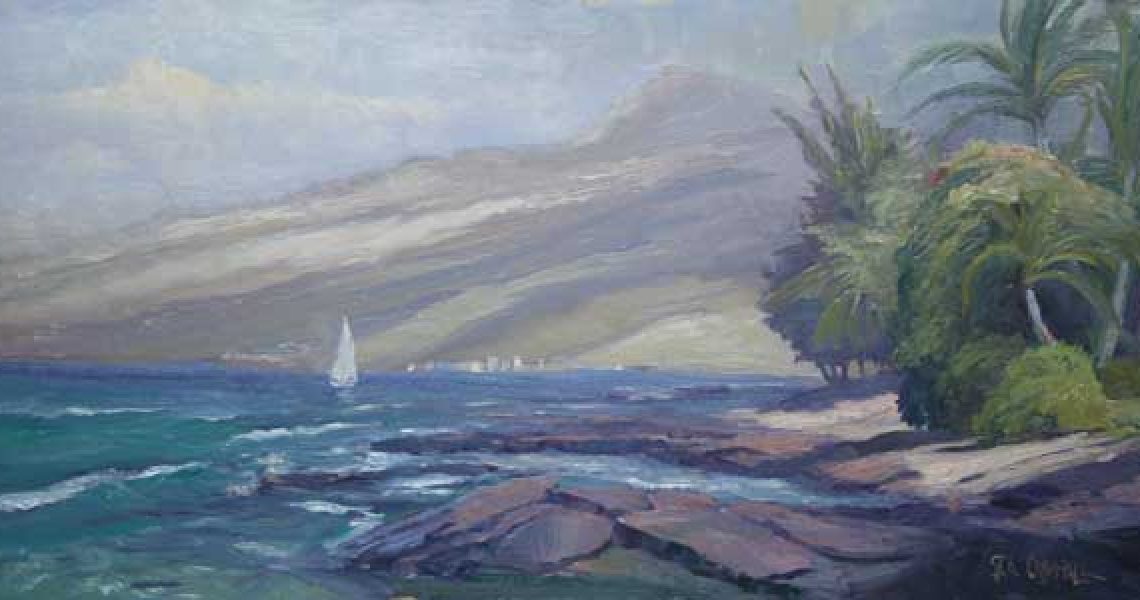 Well, it’s been more than a month since I returned to Atlanta and much that happened in Hawaii is just a sweet memory. The final few days went much too quickly. One day was lost too, spent painting the bay and a few boats right offshore near Puako. I had a hard time with it and in the end painted over this 9 x 12. I really can’t say it was misspent it was a beautiful spot, I just don’t have anything to show for it.

The next day we started at a Kohala coast beach ungracefully called 69 after the mile maker it falls on. A spectacular and different looking place with wonderful trees that grow right down to the shore and a small lava island. After walking around we set up near the shore and I did a 12 x12 that attempts to convey the feeling of this beautiful spot. I have very few photos of myself during this trip but was fortunate to meet Carlos Martinez a photographer

that shot a few pictures and emailed them to me—I hope he does not mind that I’ve published one above. I did some snorkeling after, following bright blue, and smaller yellow fish around the coral attached to the lava below the water. I should have done lots more of this while I was there.

Later in the day we drove further south into Kona again, this time with the idea of catching the sunset over the bay. We set up in a small area between a few of the honky tonks that line the main street. I did my best to capture the fantastic color but I’m afraid it does no justice to this view. After dinner and a few beers we drove back the 30 miles + to Wiamea.

Waking up on cool morning next, I requested we stay close to home in Waimea and catch some of the Hawaiian countryside that although not what anyone would envision, none the less is breathtaking. I call this section of the island Swiss Hawaii because of the wild mountains that shoot up right behind the house. This ridge is the Parker ranch and backside of the Waipio Valley and if I would have had some more time would have hiked up for a look ov

er the other side. After coffee we drove about ten minutes away and set up on country road with a view toward this impressive ridge. I guess cock fighting is a big amusement in Hawaii, I can’t think of any other reason for so many roosters. They crowed for hours from a large farm near by before finally quieting down around noon. I worked on a 12 x 24 view of a row of Norfolk pines that grow so big here. In the background you’ll see more of the hillocks, some with telltale signs of lava flow, others covered by dense highland forest. Cows worked their way across the hills as we worked, like little ants on a big piece of crusty bread. I kept the scale small so as to show of the hundred foot height of those pines that grow like weeds here. Scott’s view (below)  is similar without the trees and as he was finishing up I had enough time to do a small 9 x 12 (above). I did this over the boat painting from a few days earlier (above) and  it ended up being one of the best paintings of the trip. It has a nice slice of light across the middle and an interesting sky. The scale belies it’s small size.

On the day before I left Scott took me again to the Kohala coast to a residential area called Puako Beach. This is filled with million dollar estates but every so often along the road that parallels the ocean they have public access. We found a beautiful spot that sort of summed up the area with the ocean, lava, coral, palm trees and view of Mahukona in the background. I used my last 12 x 24 for this and set up my box right on the lava. Scott painted the same view on an 11 x 14 .The day was like every other—perfect. The Pacific was a jet deep blue outside the breakers and and we could see 50 miles down the coast past Kawaihea. Large burnt

purple streaks tatooed the side of the volcano and lazy clouds appeared and disappeared.  A lone white sail boat came into view and made the

picture perfect. Scott finished his version first and went for a swim as I sadly put the last strokes.

That evening we had a big cookout and my brother and the boys played their guitars as they had several evenings before. I used the time to carefully box up my paintings. Using cut wine cork slices between the wet ones I was able to tape them up and get all but one in the box that I used to send the original boards. In the morning I was up and packed too soon. My bother drove me to the airport in Kona and hugged me goodbye. After several hours waiting I bordered a Hawaiian air flight to Honolulu, from there another to Phoenix and finally home.

Since I have been a bit busy but thankful for my chance to experience such a magical place and spend time with Scott doing what we both love so much. The paintings I’ve returned with—some very good, some not so, are treasures and I will never part with them. I’ve done a lot of research since and know much more about the island and it’s history. In my mind I know that some day I will return.